LANDPATHS » Caballero Garcia strives to ensure community not only represented, but also engaged

FOR THE PRESS DEMOCRAT

Amid soaring temperatures over Labor Day weekend, Lesly Caballero Garcia led five Latino families on a camping trip to the Yosemite Valley. A senior bilingual education field specialist at LandPaths, Caballero Garcia had to act quickly when their volunteer service project was canceled because of wildfire smoke and record-breaking heat.

Intergenerational outings like this one drew Caballero Garcia, 29, to the nonprofit organization and its Vamos Afuera (Let’s Go Outside) program in August.

Under the LandPaths’ Branching Out Conservation for Everyone initiative, the Spanish-language program offers opportunities for the Latino community to visit ecological preserves and open spaces in Sonoma County and beyond.

This annual Yosemite trip was inspired by a family who camped with Vamos Afuera for a decade, but wanted to venture past county lines. For the sixth

year, LandPaths provided transportation to the national park, where it typically takes months to book a campsite through a reservation system that can be difficult to navigate.

Everyone was outfitted with camping gear, shown how to set up their tents and taught Leave No Trace practices.

“Public land is for everyone, but our county and state demographics aren't fully represented in these outdoor spaces,” Caballero Garcia said. “Seeing everyone in awe of such an inspiring place reminds me why I do this work.'

With the smoky conditions, Caballero Garcia switched the Labor Day adventure to a more educational itinerary including a visit to the Yosemite Museum.

“LandPaths is carried by powerful and capable women,” said Benji Dambach, an outings field specialist who supported Caballero Garcia on the excursion. “Lesly’s ability to communicate effectively in more than one language is imperative to our mission. Everyone benefited from her leadership and flexibility.”

In addition to fostering connections to the natural world, empowering famines to explore on their own is one goal of LandPaths. In addition to school field trips under their Rooting Youth in Nature initiative, LandPaths contracts with Santa Rosa City Schools to provide nature-based summer camps for Title I students.

“I see great joy and pride in the work she does, helpLesly

Nakama calls Caballero Garcia “invaluable” to the team and noted she had an instant rapport and comfort level with parents.

“That sense of belonging is one of the most important things we try to provide,” she said.

Born in Hidalgo, Mexico, Caballero Garcia immigrated to this country when she was 2 years old and grew up in Petaluma. While enrolled at Santa Rosa Junior College, she accepted a paid internship promoting a nature festival at Muir Woods National Monument. As an 18-year-old, she knew redwood trees existed, but she hadn’t ever seen one. Walking in that forest for the first time was life-changing.

“I didn’t have the word for healing, but I just looked up and felt at peace inside,” Caballero Garcia said.

She also noticed a lack of representation at the park: The ranger didn’t speak Spanish, and there were few people of color in the woods.

“I had never done outreach, but I knew where my community was,” she said of the successful event turnout, with Latino visitors coming from as far as Santa Rosa to commune with the world’s tallest trees. “That's when I decided what I wanted to do.”

As a first-generation college student and the eldest of five girls in what she calls a resilient family, Caballero Garcia felt some pressure to be a role model. But she pushed against expectations to pursue a higher-paying career to study something she cared about.

Caballero Garcia started volunteering to lead outings for Latino Outdoors to address inequity. A year or so later, she organized her first camping event with 60 people at Pomo Canyon. Eventually, she worked as an outdoor educator with NatureBridge in Southern California followed by a four-year stint in Yosemite.

Motivated to share her love for the outdoors with her community while addressing barriers to access from a programmatic standpoint, she returned to Sonoma County.

Thinking back on her own experience of summer camp, as well as her previous work in Yosemite, she said she realizes she didn’t see herself reflected in those leadership positions.

She wants her own students to feel differently. Her advice to young people is to find what brings you fulfillment and try to make a living out of that.

Caballero Garcia didn’t grow up hiking and camping. However, that wasn’t because her family wouldn’t enjoy outdoor activities — a common misconception.

As a young adult, she visited her family’s Mexican hometown, which she describes as small and poor, but rich in culture, and realized “a lot of immigrant families like mine have a deep connection to nature.”

“There's no specific word for hiking in Spanish; caminando — walking — that’s just a way of life. To be in nature, to be in relationship with the land. But it’s something often erased, or taken away with immigration, working in the fields or essential workers simply trying to survive,” she said. “Vamos Afuera just exposes people to different ways of interacting and the importance of reconnection.”

Caballero Garcia also sees that erasure via environmental history and the way stories are told. Narratives of national park conservation typically focus on such naturalists as John Muir, but she emphasizes the importance of culturally relevant education.

“My job is to share those hidden stories that include all of us: African Americans who were the first park rangers, Chinese immigrants who constructed the roads, Indigenous people who named the mountains,” she said.

This year, as an Indigenous ranger discussed Yosemite’s Native American cultural history, many people made connections to their own Mixteca roots in Mexico.

Making everyone feel welcome outside is a Land-Paths priority. By their fourth day in Yosemite, people felt like extended family.

When Caballero Garcia watched teenagers set down their phones to swim in the river and remark on the natural beauty, then say they didn’t want to go home, she knew they’d succeeded. 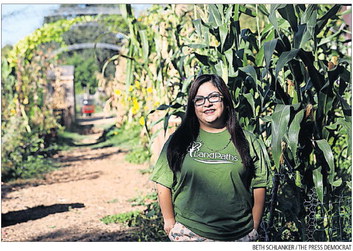