Locals rally around a rebuild for two health care workers— with plenty of space for active kids and their many farm animals.

YOU KNOW YOU’RE VISITING a home with spirit when the owners show off a pet named Barack O’Llama. That’s the atmosphere at the farmhouse belonging to Natalie Marks and Kevin Howe, perched high in the hills above Santa Rosa’s Rincon Valley. Howe, a Santa Rosa native, is an orthopedic surgeon; Marks, who grew up in Santa Barbara, is a physician’s assistant. The couple head up a blended family with five children between them—two away at college and three still living at home full time. Also at home full-time are the family’s many farm animals: the presidential llama, plus alpacas, two steers, chickens, rabbits, and pigs that the kids are raising for 4-H.

All the kids are expected to pitch in on the farm. “It makes them well-rounded, and they understand where the food comes from,” Marks says. “Plus, it’s good, quality food.”

Howe and Marks purchased the 7-acre property and an original Cape Cod-style home in 2016, looking for a place where their family could find connection with one another and with the land.

They lived there just a year before losing the home in the 2017 wildfires.

The morning after the blaze, the couple’s thoughts had already turned to rebuilding. Howe reached out to a former classmate at Santa Rosa High School, Kevin Zucco of ZFA Structural Engineers. Within a week, he had helped Howe and Marks connect with two other Santa Rosa locals: architect Nate Bisbee and builder Richard Kirby, a volunteer firefighter who had been out fighting the blazes. “We got really great people right away,” Howe recalls. “We got people that we could trust and that were from our community. I mean, everybody who worked on this house is from here.” 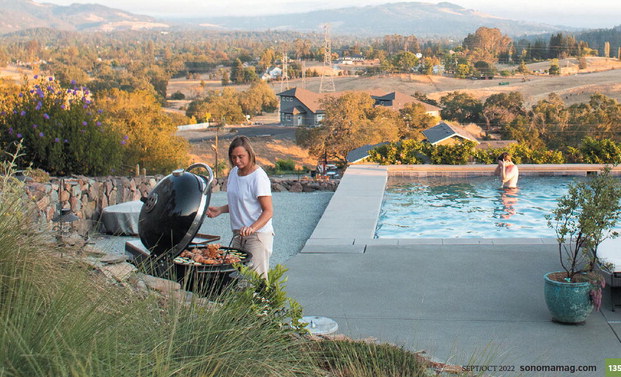