The Sonoma County District Attorney’s Office has demanded PG&E turn over evidence from the 2019 Kincade fire, advancing a criminal investigation into the utility’s role in the origin of a fire that burned 77,759 acres and threatened northern Sonoma County communities from Windsor to Cloverdale.

PG&E received a search warrant from the District Attorney’s Office compelling the utility to produce documents and other information related to the Kincade fire, the company disclosed Thursday in a U.S. Securities and Exchange Commission filing.

District Attorney Jill Ravitch said she couldn’t comment on what type of evidence her office is seeking because it is an active investigation, noting that the search warrant affidavit was sealed by a judge. PG&E has agreed to waive any statute of limitations for violations — a period of one year for misdemeanor crimes — through April 23 while prosecutors conduct their investigation.

“We’re looking to see whether anything that occurred was the result of negligence, reckless conduct,” Ravitch said.

PG&E issued a statement Thursday pledging to cooperate with the investigation and underscoring the company’s commitment to “the safety of our customers and the communities we serve.”

The company said it “expects to produce documents and respond to other requests for information in connection with the investigation and the search warrant.”

“Since the fire, PG&E has cooperated with CAL FIRE, Sonoma County and the CPUC (Public Utilities Commission) in their investigations,” the statement read. “We received this

request for information from the Sonoma County DA, are currently reviewing it, and will respond within the time requested.”

The SEC filing shed light on the toll of the Kincade fire. PG&E warned investors its liability from the fire could exceed $625 million for property damage, business interruption and other losses, describing the figure as a “lower end” estimate.

PG&E reported that 22 lawsuits have been filed against the company over the Kincade fire on behalf of about 504 plaintiffs in Sonoma County and San Francisco superior courts — a number the company expects will grow.

The Kincade fire broke out late Oct. 23, 2019, amid a battering wind storm in the remote Mayacamas Mountains east of Geyserville.

Under that wind, equipment on a high-voltage transmission line broke, sending sparks into dry vegetation. The fire burned into the Alexander Valley that night and, fueled by subsequent wind storms, continued to menace the county for days.

Nearly 190,000 people were ordered to evacuate their homes by Sonoma County officials wary of the uncontrolled fire’s potential to burn into neighborhoods of Healdsburg and Windsor and rip into forested communities west of Highway 101. That scenario would have been an even more nightmarish repeat of the 2017 firestorm that destroyed Santa Rosa neighborhoods.

A heroic firefighting force, buoyed by lessons learned from 2017 and breaks between windstorms, halted the fire’s advance into those cities, but not before the fire destroyed 374 structures, including 174 homes, and injured four firefighters.

The fire dealt a hard blow to the Alexander Valley wine-growing and agricultural region.

At that point, Cal Fire handed its report detailing the agency’s investigation to Sonoma County. It has been withheld from the public while Ravitch’s office decides whether to file charges against the company.

Ravitch said her office is currently narrowing its focus following a wide-net investigation into possible felony and misdemeanor crimes, ranging from environmental charges to health and safety code violations.

“We’ve received the reports from Cal Fire, we’ve been consulting with experts, we also have received information from PG&E that they have volunteered to us,” Ravitch said. “It’s been an active investigation from the day the fire occurred.”

Recent wildfires linked to PG&E equipment have surfaced long-standing accusations that PG&E has neglected its electric and gas systems.

In 2016, PG&E was found guilty of negligence in the 2010 San Bruno gas pipeline explosion. And in June, the company pleaded guilty to 84 counts of manslaughter for its role sparking the Camp fire, which destroyed the Butte County town of Paradise.

Ravitch filed no criminal charges against PG&E for any of the 2017 fires in Sonoma County that investigators blamed on the company’s equipment. “That was because we had insufficient evidence to go forward,” Ravitch said Thursday.

However, Ravitch launched an investigation into Windsor-based Oakmont Senior Living and related companies that own or operate two Santa Rosa senior care homes, Varenna and Villa Capri, where about 100 frail residents were abandoned during the 2017 fires. In September, local and state prosecutors reached a $500,000 settlement with a related company, Oakmont Management Group.

Some people gathering petitions, who may or may not be connected to the official campaign, have tried to get public interest in the recall campaign with handmade posters accusing Ravitch of being weak when it comes to holding PG&E to account for recent wildfires.

Ravitch, pointing to the 16-month investigation into the Kincade fire, said the argument has no merit. 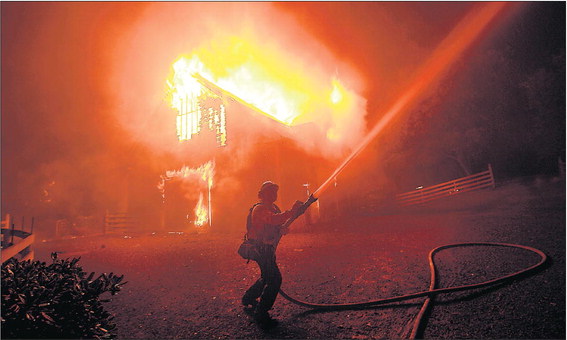